Herbalism is a Life Skill.

Through Herbalism, one can gather materials required for Pharmacy. The Herbalist in Da Li will be your first teacher.

Herbs, like ore, appear in pre-defined locations and disappear once gathered, however reappear cyclically relating to what herbs locations are present in the scene. Level 1 herbs appear in 7 different scenes, whilst any higher level herbs appear in a single scene; there may be up to three different types of herbs in a scene, however they will always require the same minimum Herbalism level. If a player is within a certain proximity to a herb, it will appear as

on the mini area map at the top right corner of the user interface. This can be hovered over with the cursor to reveal which type of herb it is.

To gather herbs a player must have a Sickle 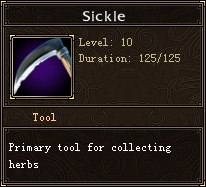 equipped or in their inventory. When a player comes across a herb, which only appear in wild fields, they should move close to it, as if one clicks it from a distance the character may run into a blocked path and system message will inform them that they are too far away. To gather the herb, a player should hover their cursor over the herb which changes the cursor from a pointing hand to a sickle, and then left click. The process of gathering takes about 6 seconds, then a Loot Box appears, which will contain the herb just gathered, and has a chance to also contain a concomitant, and rarely gems and Dragon Balls. Spirit is consumed as soon as the Loot Box appears; only when the box is empy will the herb disappear. If another player is harvesting the same herb, they view and can take what the other player sees (whether they see rare loot there is currently unconfirmed).

Retrieved from "https://tlbbeu.fandom.com/wiki/Herbalism?oldid=10089"
Community content is available under CC-BY-SA unless otherwise noted.