Pharmacy is a Life Skill that consumes vigour. Pharmacy materials, for example Liquorice 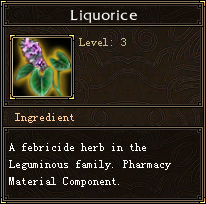 , can be acquired via Herbalism. One must learn recipes before medicinal items can be produced. It is similar to Cooking in that it requires ingredients to produce consumable items, though it's a disadvantage that recipes must be used within a close proximity to a stove, which is found next to NPCs that teach Pharmacy.

Standing close to a stove, found next to Pharmacy NPCs, open the Pharmacy life skill and choose a recipe. Recipes must be pre-learnt and require certain Pharmacy levels in order to be learnt. If you have enough Vigour, required ingredients and 2 item inventory space, click "produce" or "produce all" and you will make a medicinal item with that recipe.

Many items produced with this life skill are required for guild and class quests. Pharmacy has a secondary life skill, Pharmacology, which reduces the vigour cost of producing items with Pharmacy, and increases the likelihood of "accidental" ingredients being produced, which are especially sought after for some quests.

Common recipes require herbs that have been harvested via the Herbalism life skill, though they can be bought. There are standard drugs which are produced, though occasionally two drugs are produced at once, with the extra one being a buff-type medicine.

Retrieved from "https://tlbbeu.fandom.com/wiki/Pharmacy?oldid=9698"
Community content is available under CC-BY-SA unless otherwise noted.